What is a False Widow Spider, and How Do I Get Rid of it?

Apparently, the first false widow spiders arrived in the UK in a bunch of bananas from Madeira and the Canary Islands, its native homeland. The first recorded sighting of the spider was in 1879 in Torquay. From there the species spread across southern England. ‘False widow’ is the shortened version of its real name, which the Noble False Black Widow Spider.

Why are false widow spiders suddenly in the UK spotlight right now?

For whatever reason, this species of the widow family is flourishing and spider infestation in the south and east of England has been reported. In fact, several schools had to close their doors for a while due to infestations. Dozens of spiders were reported to be crawling over the gates. They’re in pubs, in outbuildings, and garages – in fact, they’re everywhere and they’re drawn to mess, such as piles of clothes on the floor.

By making use of ‘twitter mining’ entomologists have been able to gather social media reports to substantiate the conclusions of the University of Gloucestershire’s arachnid (spider) experts that the 2019 spider season was very busy indeed.

Likely due to humid conditions brought on by the warm, wet summer weather, the lush green environment gave these false widow spiders plenty to eat. Now the urge of all these well-nourished critters is to find hidey-holes in British homes, schools and other buildings to mate and make more of the same.

Why Named a ‘False Black-Widow’ Spider?

The false widows have similar round, bulbous abdomens to black widows but are more brownish with pale markings as opposed to the classic pitch-black shoe-polish colour of the black widow spider with the tell-tale red hour-glass pattern.

Still, because they are so readily mistaken for the black widow variety, the ‘False Widow’ nom de plume stuck. False widows, unlike their distant black widow cousins, however, have teeth – we kid you not! 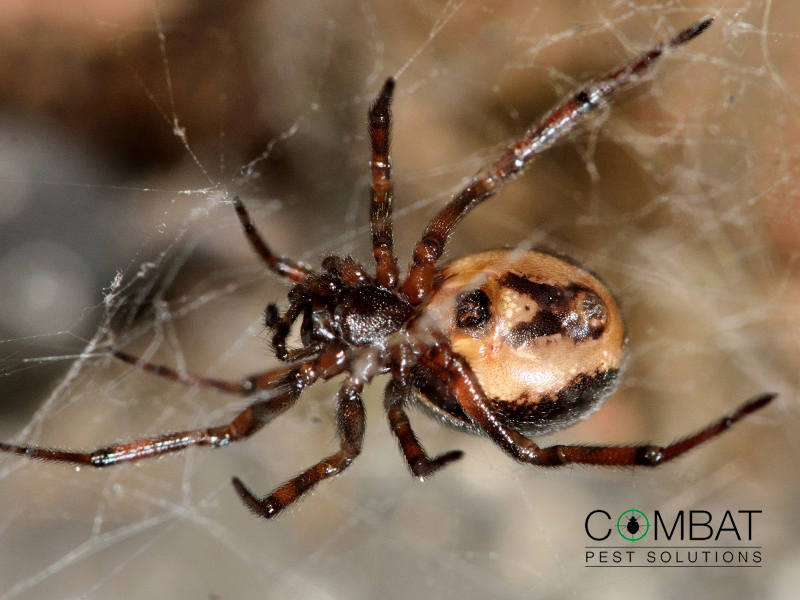 Not considered as venomous as its black widow cousin, the false widow variety still delivers a nasty bite. The thing with the venom from the arachnid family is that the damage to human tissue is extensive.  A cleaned wound looks like something drilled neatly and tunnelled deep into the epidermal skin layer. Infections from unclean wounds cause more of a problem than the bite itself and doctors are very specific about how they treat false widow spider bites.

Once the wound is clear the doc needs to fill the ‘tunnel’ with a dissolvable gauze. The idea is that the tunnel must close from the deepest point upward – the skin surface, being the last to heal. Should the skin wound heal first, then any infection deep inside cannot escape. A few visits and a few cleanings later, the wound can finally close on the skin surface. So, a bite from the false widow is no light matter.

What to Do if Bitten by a False Widow

The first thing to do is to wash the bite site with soap and water. Apply a cold compress or icepack to counter excessive swelling for at least 10 minutes. If possible, raise the affected area – lift the leg or keep the arm up, which also reduces swelling. Keep clean and avoid scratching to reduce infection.

Having said that, if you’ve been bitten near your eyes or mouth get to a doctor immediately. If, despite your best efforts, the area around the bite site becomes red and swollen, get medical attention. If, either immediately after a false widow bite, or at any time thereafter you develop flu-like symptoms, run a fever of your glands swell, go to a doctor straight away.

Get to the emergency room at the nearest hospital if there is wheezing and difficulty breathing, a swollen face or mouth or throat, any nausea or vomiting, a raised heart rate, difficulty swallowing or dizziness.

How to Get Rid of False Widow Spiders

For proper eradication, there’s no question that it’s time to call in the experts. Until you do, it’s important not just to go spraying pesticides willy-nilly. Many do not work on these spiders and yet others are not approved for use in outside garden areas.

Until your skilled professional arrives, you might want to vacuum webs and spiders that are visible. Take photographs before you do to show the pest controller.

For more information on the effective eradication of false widow spiders, please feel free to contact Warren and his team.